Our planet Earth has many strange and often beautiful places that retain the power to inspire and mystify. They remind us that even in this age of technical and technological marvels there are still amazing places to be discovered. Here are some of our favorite alien-like landscapes on earth: 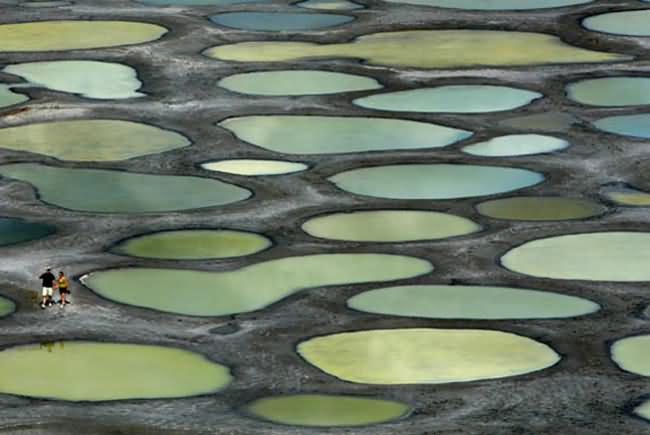 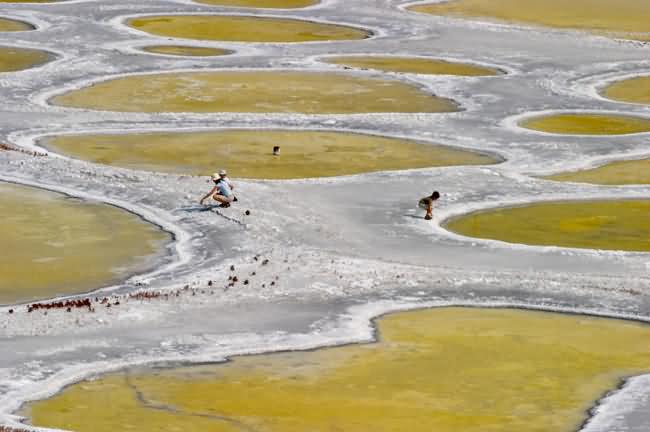 In the summer, most of the water in the lake evaporates leaving behind all the minerals. Large “spots” on the lake appear and depending on the mineral composition at the time, the spots will be different colors. The spots are made mainly of magnesium sulfate, which crystallizes in the summer. Since in the summer, only the minerals in the lake remain, they harden to form natural “walkways” around and between the spots. 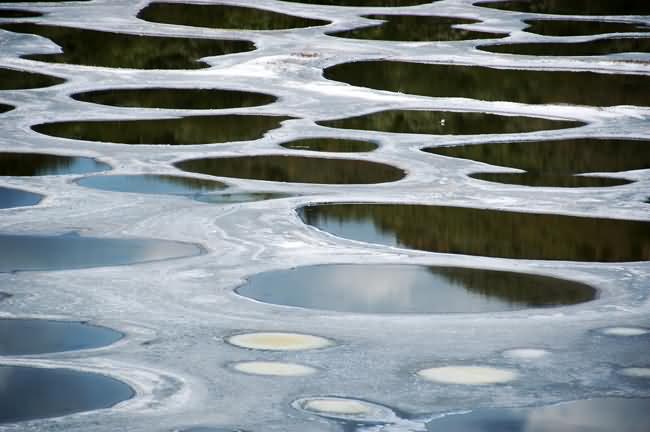 Spotted Lake contains some of the highest quantities in the world of magnesium sulfate, calcium and sodium sulphates. 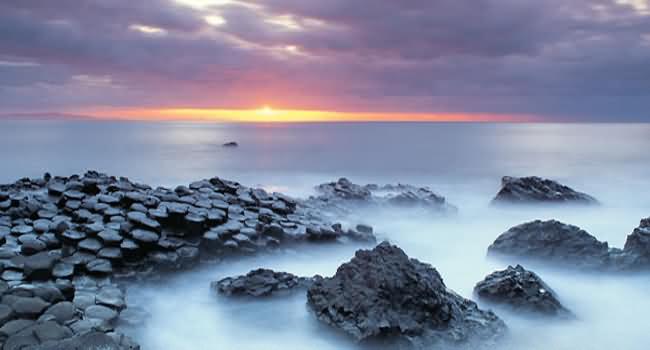 The Giant’s Causeway is an area of about 40,000 interlocking basalt columns, the result of an ancient volcanic eruption. It is located in County Antrim, on the northeast coast of Northern Ireland. 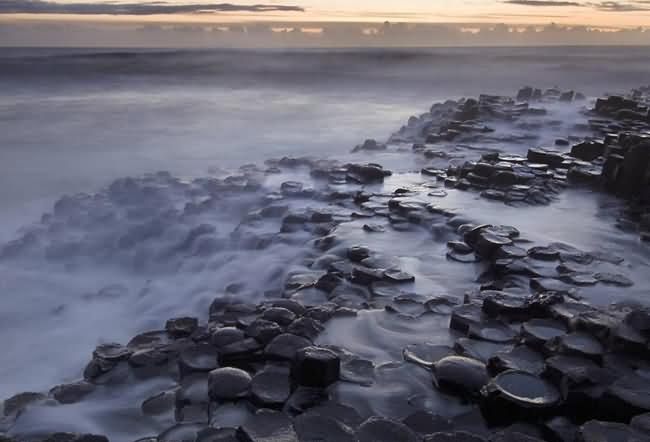 Legend has it that the Irish warrior Fionn mac Cumhaill (Finn McCool) built the causeway to walk to Scotland to fight his Scottish counterpart Benandonner. One version of the legend tells that Fionn fell asleep before he got to Scotland. When he did not arrive, the much larger Benandonner crossed the bridge looking for him. To protect Fionn, his wife Oonagh laid a blanket over him so he could pretend that he was actually their baby son. In a variation, Fionn fled after seeing Benandonner’s great bulk, and asked his wife to disguise him as the baby. In both versions, when Benandonner saw the size of the ‘infant’, he assumed the alleged father, Fionn, must be gigantic indeed. Therefore, Benandonner fled home in terror, ripping up the Causeway in case he was followed by Fionn. 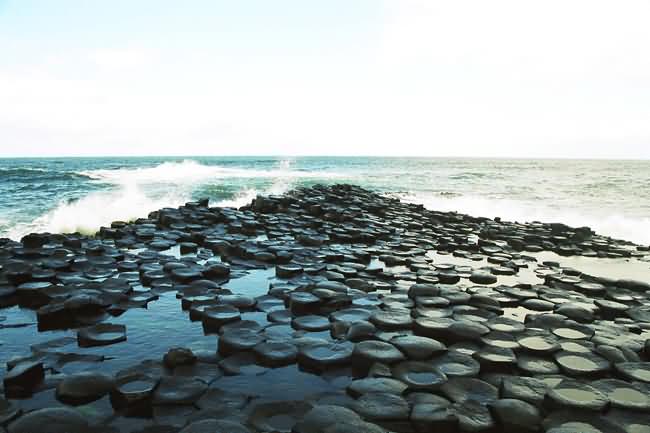 The Giant’s Causeway is today owned and managed by the National Trust and it is the most popular tourist attraction in Northern Ireland. 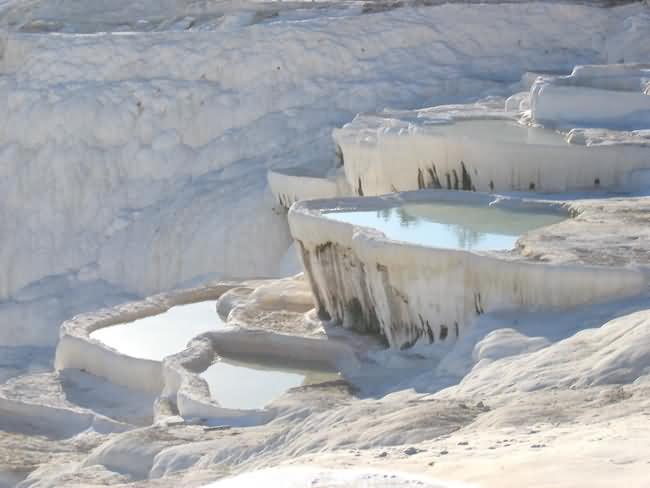 The strange and weirdly beautiful terraced pools of Pamukkale have been appreciated for over two millennia and yet still remain a little known wonder of the world. 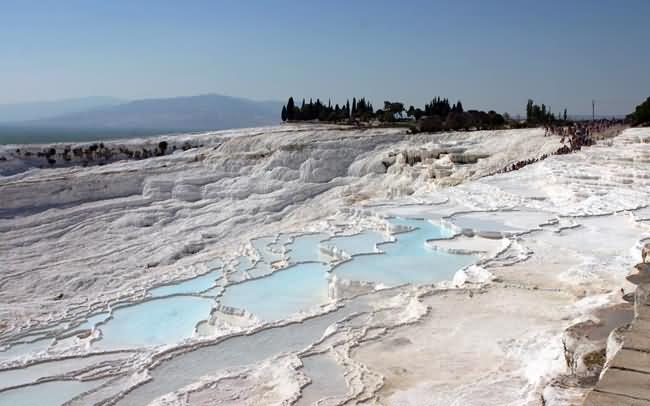 Thousands of years ago earthquakes, which are common in Turkey, created fractures that allowed powerful hot springs to bring water rich in calcium carbonate to the surface. As the water evaporated the chalky material condensed and formed layer-upon-layer of Travertine and thus slowly built up the walls over time in the same way that a stalactite forms in a cave. 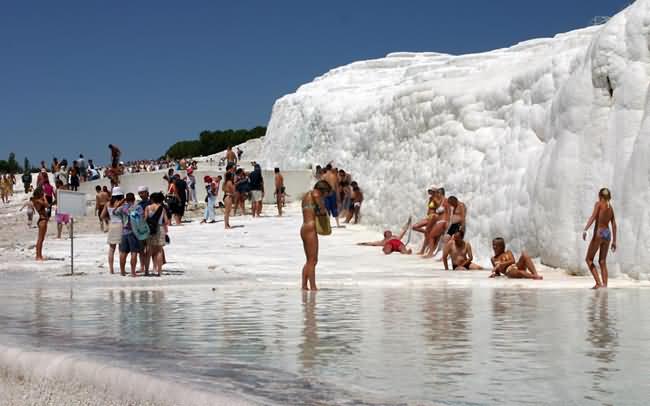 Apparently Pammakale means Castle of Cotton but the Greco-Romans built a town above it called Heirapolis – meaning “Holy City” or “Sacred City”. They too recognised it as a rare and important place attributing healing powers to the milky-white waters. 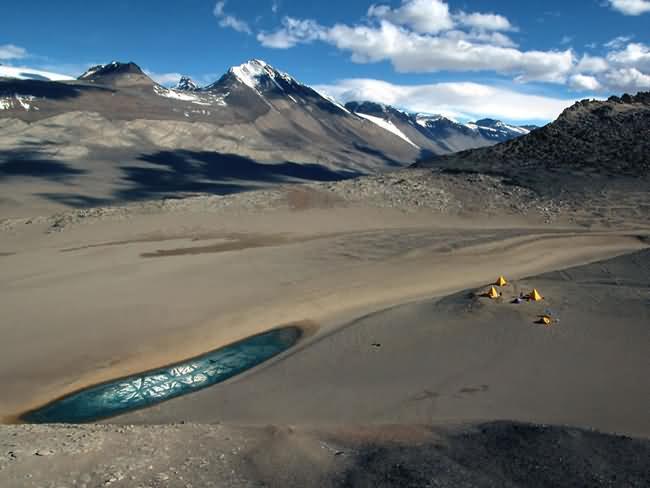 The McMurdo Dry Valleys are a row of valleys in Antarctica located within Victoria Land west of McMurdo Sound. The terrain looks like something not of this Earth. The region includes many interesting geological features including Lake Vida and the Onyx River, Antarctica’s longest river. 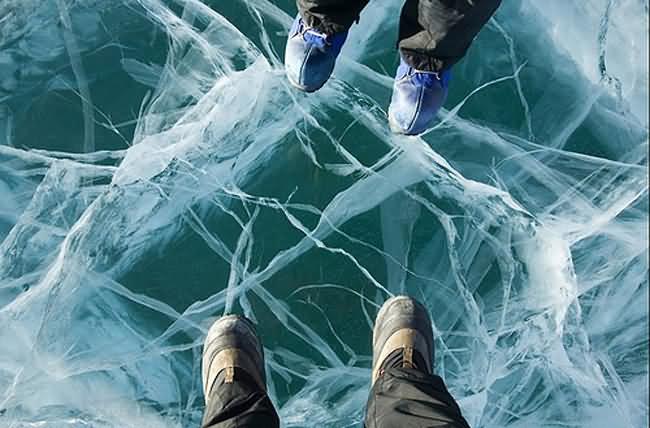 The valley’s floor occasionally contains a perennially frozen lake with ice several meters thick. It is also one of the world’s most extreme deserts Under the ice, in the extremely salty water, live mysterious simple organisms, a subject of on-going research. 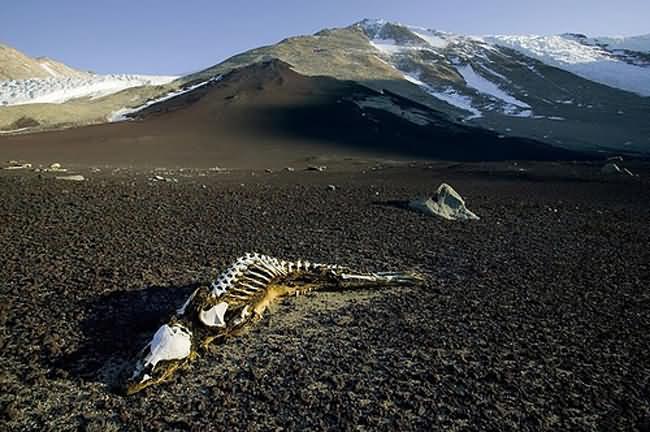 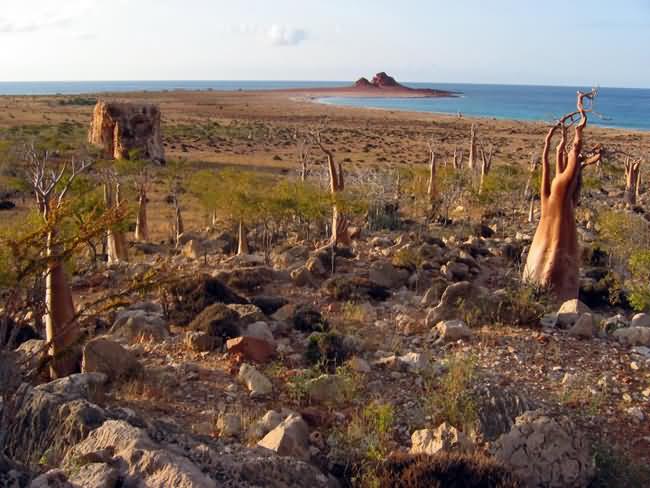 This island simply blows away any notion about what is considered “normal” for a landscape on Earth, you’d be inclined to think you were transported to another planet – or traveled to another era of Earth’s history. 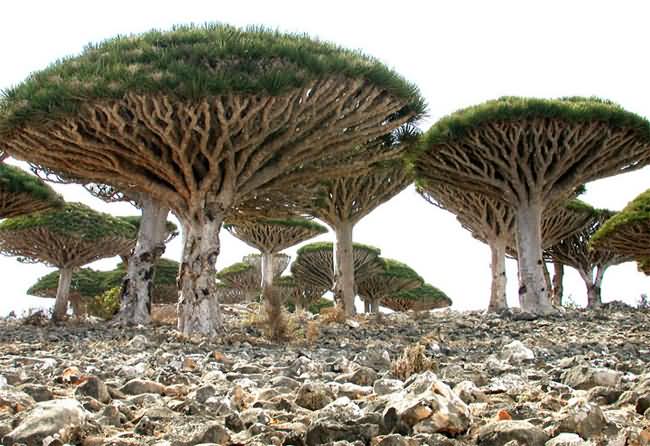 Socotra Island, which is part of a group of four islands, has been geographically isolated from mainland Africa for the last 6 or 7 million years. Like the Galapagos Islands, the island is teeming with 700 extremely rare species of flora and fauna, a full 1/3 of which are endemic. 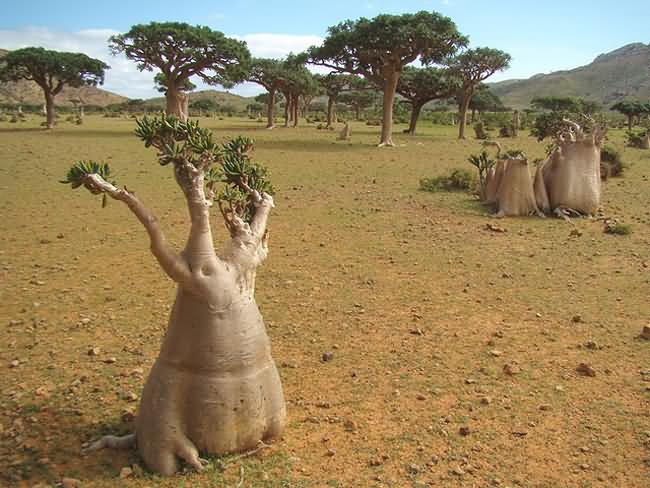 The climate is harsh, hot and dry, and yet – the most amazing plant life thrives there. Situated in the Indian Ocean 250 km from Somalia and 340 km from Yemen, the wide sandy beaches rise to limestone plateaus full of caves (some 7 kilometers in length) and mountains up to 1525 meters high. The trees and plants of this island were preserved thru the long geological isolation, some varieties being 20 million years old. 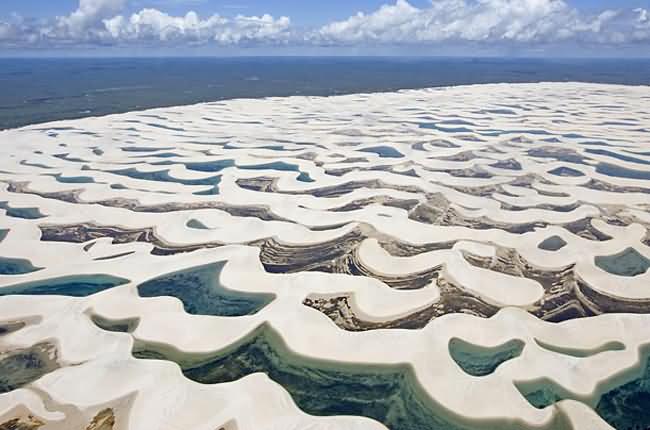 Located in the State of Maranhão, on the north shore of Brazil, the Lençóis Maranhenses National Park is an area of about 300 square kilometers (155,000 ha) of blinding white dunes and deep blue lagoons, forming one of the most beautiful and unique places in the world. The dunes invade the continent over 50km (31 miles) from the cost, creating a landscape that reminds a white bed sheet, when seen from above. 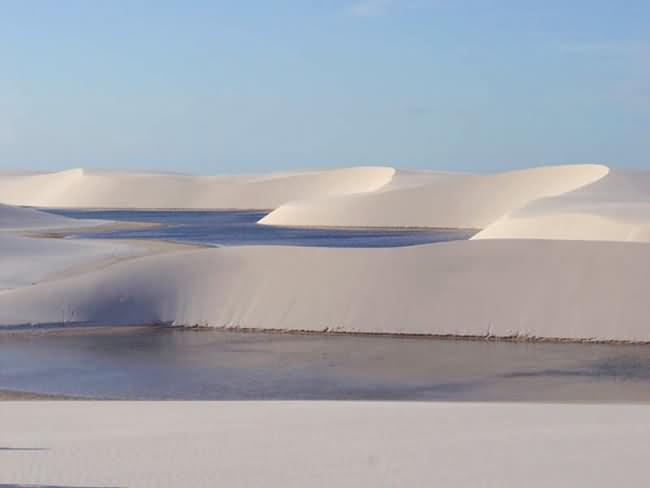 Lençóis Maranhenses looks like an archetypal desert. In fact it isn’t actually a desert. Lying just outside the Amazon basin, the region is subject to a regular rain season during the beginning of the year. The rains cause a peculiar phenomenon: fresh water collects in the valleys between sand dunes, spotting the desert with blue and green lagoons that reach their fullest between July and September. 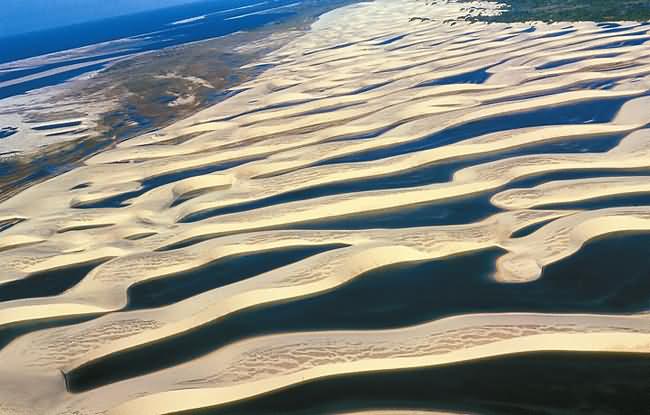 The area is also surprisingly home to a variety of fish which, despite the almost complete disappearance of the lagoons during the dry season, have their eggs brought from the sea by birds. 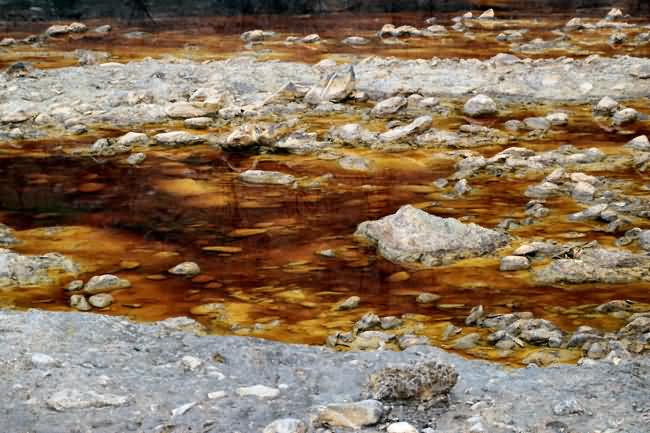 The vast mines of Rio Tinto give a hypnagogic, almost martian landscape. Its growth has consumed not only mountains and valleys but even entire villages. 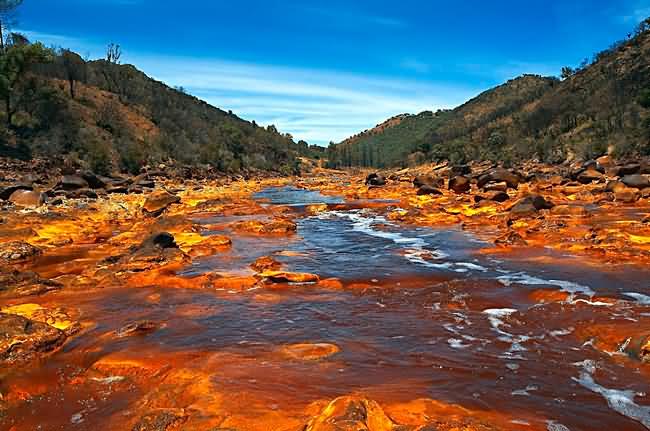 This river has gained recent scientific interest due to the presence of extremophile aerobic bacteria that dwell in the water. The extreme conditions in the river are analogous to other locations in the solar system thought to contain liquid water, such as subterranean Mars. 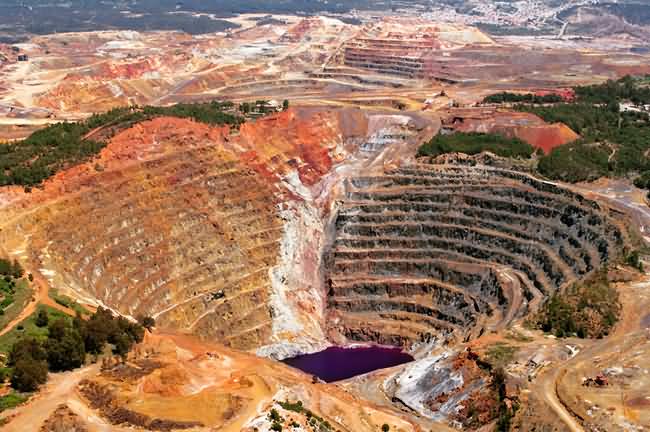 Río Tinto is notable for being very acidic (pH 2) and its deep reddish hue. It is metal solvent and surely not human-friendly!