When we travel to foreign countries, we like to make sure that we’re always in good hands. Safety is a primary issues for travelers especially those who are visiting a certain country for the first time. While major countries all over the world have invested so much time, money and effort into keeping their passengers safe, here are ten of the wildest, most heart stopping and nerve-wracking rides you will come across in your travels. Thanks to Journey Etc for the list of them in order, starting from the “safest” to the riskiest. 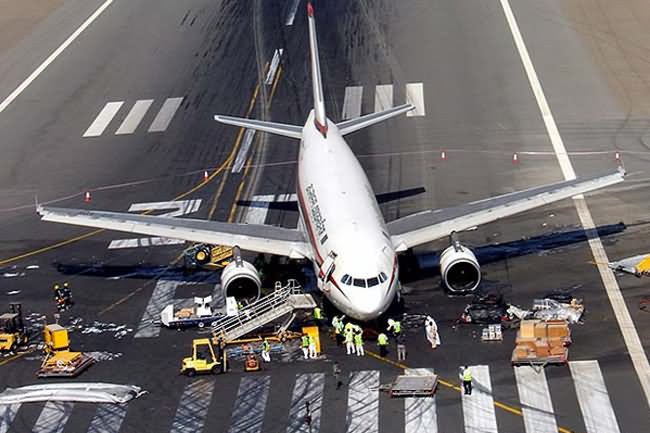 This airline offers flights from Bangladesh to India and back. However, passengers on this flight may very well think that the two hour journey lasted two whole days because of the questionable hygiene in their surroundings. If you’ve managed to book yourselves a flight with them, expect the seats to have mysterious stains and for the cabin to have a distinct but definitely weird smell, something akin to a sports gym’s dressing room. Also make sure that you step lightly once you’re on board because the carpets will most likely be threadbare. All in all, Biman Bangladesh Airlines has no more than seven functioning airplanes for their entire operations. Unfortunately for passengers, these planes are old so don’t expect a shiny new aircraft fresh from the manufacturer’s hangar.

The truth is, this airline has not managed to do well on customer satisfaction, ratings have been consistently low, with the airline usually taking the bottom spot of the satisfaction list. With the current state of their aircraft making their rounds in the sky, maintenance for each plane should also be of great importance for the benefit of both their passengers and crew. 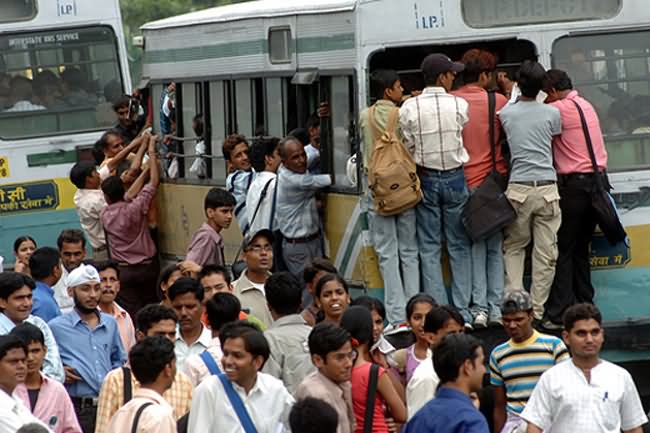 In India, public buses are a popular alternative to commuters who want to get around. If you want to get a taste of how the locals literally sweat it out during their daily commutes, hop inside a Bluelines Bus that you can find anywhere in Delhi and give your sweat glands and pores a good workout. Make no mistake, these buses can travel very slowly and are notorious for being dirty and sometimes smelly. Temperatures inside these buses tend to rise especially when passengers are crammed against each other like pieces of sardines inside a small tin can.

A usual journey inside onboard a Bluelines Bus will usually take you about an hour and 30 minutes. However, these buses are also known to go flying down the road at very high speeds. Worse of all is that these buses can usually be found on the wrong side of the road. Unfortunately for pedestrians, accidents caused by these buses are not rare. Three years ago back in 2007, a Bluelines bus was found to be responsible for the untimely death of around 120 persons in the capital city of India. While it may seem like a scary roller coaster ride for passengers inside the bus, pedestrians and cyclists are actually in more danger because they run the risk of being run over by these buses. 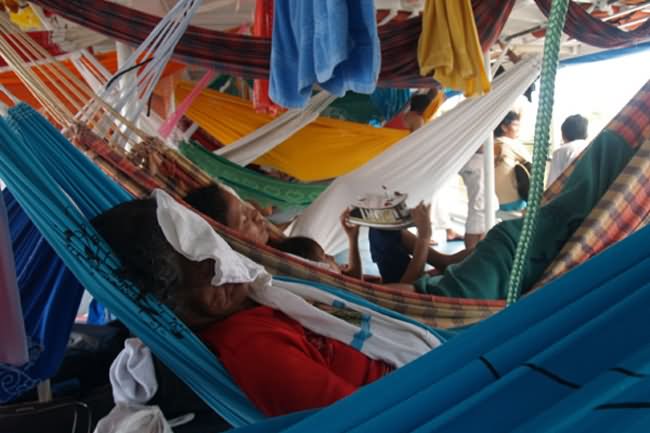 If you’re planning on exploring the Amazon river by boat, get ready to rough it up as you make your journey across the water. These ferries are usually overloaded not just with passengers but with cargo as well. Others who have had the experience of riding in these ferries say that the crew usually just let the passengers come on board despite obvious overloading issues. One whole deck of the ship is usually filled with an assortment of cargo such as vegetables, onions and even crates of tomatoes. Two years ago back in 2008, a ferry named Almirante Monteiro accidentally collided with another vessel in the river, a barge. The incident resulted in the death of at least fourteen people.

Because these ferries are usually overloaded with passengers, you can expect the quarters on board to be a bit tight. All around you, passengers will be either sleeping soundly in their hammocks, brushing their teeth for all the world to see, eating or drinking beer, and even playing a friendly card game with a couple of friends. With so many people crammed in one space, it can get pretty hot sometimes due to the collective body heat being generated. The bathrooms are also quite small, and the aroma is pretty strong. 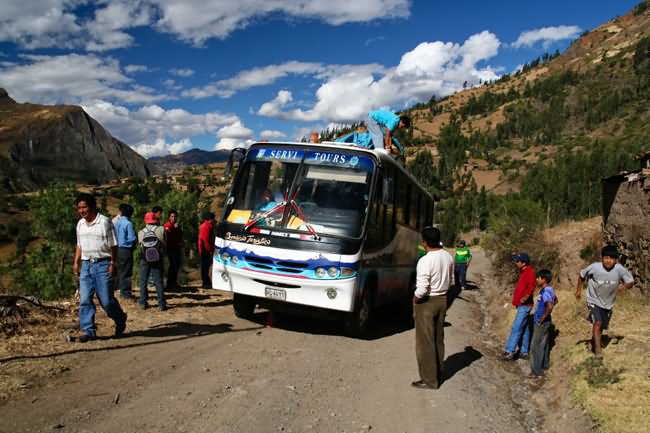 If you find yourself usually being lulled to sleep when you ride a bus, chances are you won’t be able to get a wink of sleep inside one of Peru’s public buses. These buses usually travel along dangerous roads by Peru’s mountainside and it’s not uncommon to hear news of these buses falling off these high cliffs along with the many passengers that with them for the ride. In fact, records show that for South America alone, around 1.2 million lives are claimed each year during vehicular accidents in their local roads. These buses usually go on very long journeys, some taking 24 full hours to complete, like the trip from Ayacucho all the way to Cuzco.

The roads are also partly to blame for these accidents. Paved roads are a rare sight in these mountains, usually the buses pass through one lane tracks that curve around the side of the mountain, right next to very high cliffs. During the day, passengers have to endure the heat inside the bus and at night, the cold tends to penetrate your skin all the way to your bones. There are also no guard rails to protect these buses from plunging to their demise. 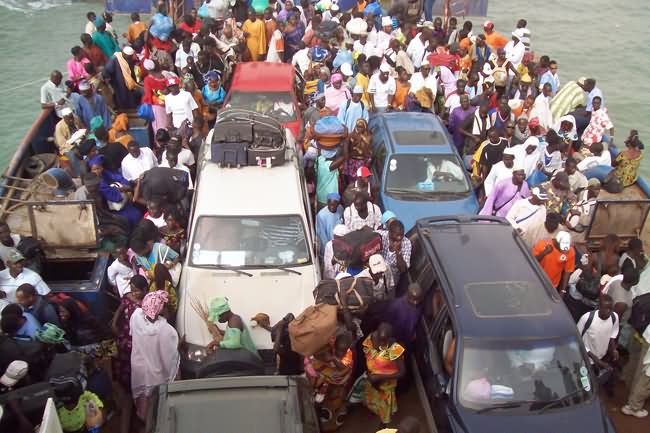 Travelers making their way to Bangladesh will come across lots of ferries upon their arrival. However, it is important to note that most of these ferries are not officially registered with the local government. Records show that Bangladesh has 20,000 ferries, only 8,000 ferries are registered with the local government and even fewer are deemed fit to operate on water and take on paying passengers. One statistic shows that around 1,000 lives are claimed each year due to accidents that take place on these ferries that make their way around the waterways of the country.

A rusty vessel should come as no surprise if you plan on taking this mode of transportation in Bangladesh. The usual passenger limit of 900 persons will usually swell to about 3,000 persons all packing themselves in this small boat. Officially, these ferries can carry 150 tons of extra cargo but even this limit is sometimes overlooked. A person who once had the opportunity to step inside the captain’s area said that the vessel was not equipped with any global positioning system or GPS, or even radar. Information was relayed to and from the vessel through the radio, which was the main communication system. The heavy rains and howling winds brought about by the monsoon season also add to the danger of these ships capsizing. 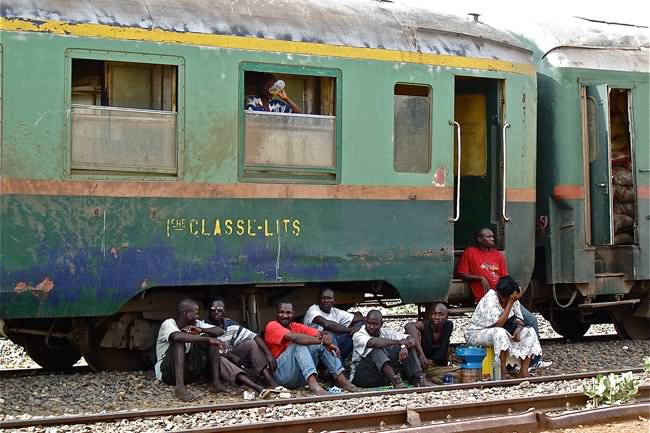 Only hardy travelers are advised to get on the Dakar Bamako Express Train in the western part of Africa, which makes its two day journey from Mali all the way to Senegal. Passengers looking at this battered train will definitely wonder if the train experienced any good days at all since the start of its operation.

Inside the train, you have to endure a lot of challenges that you simply can’t escape during your journey. First of all, the temperatures inside the train tend to get high because of the intense heat in the area. Body heat being generated from the different passengers inside the coach also contributes to the intense temperatures. The interior of the train is also dirty, so don’t have high hopes that you’ll be able to relax during the trip. On the contrary, this harsh environment might only make you tired and irritable. If it makes you feel any better, all the other passengers inside the train are experiencing the same hardships as you are. In a way, you’re all in it together as the hours go by and you leave mile after mile behind. One thing you can do to help while away the hours is to drink tea and people watch. 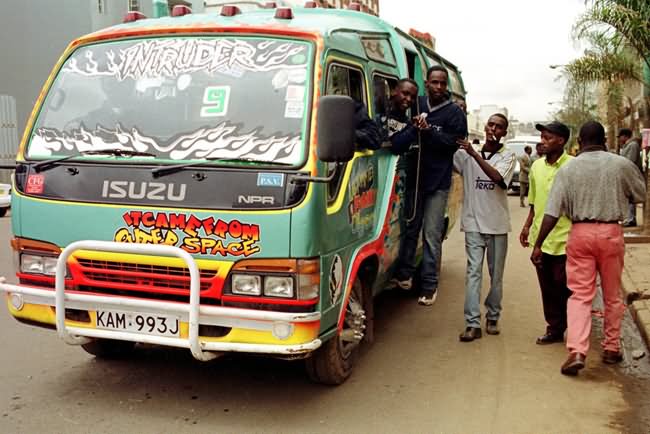 Space is precious on a matatu in Kenya, Africa. The matatu, which is the local name for a public shuttle bus, is officially permitted to carry only 23 passengers during a trip. However, a matatu usually makes its journey with more than double that number of passengers all jammed together inside the bus. Some unyielding passengers may even have a limb or two hanging out the window as the bus trudges along the roads in Kenya. Needless to say, it can be quite hot and smelly inside the bus. If you’re one of those people sitting by the window, make sure you don’t fall out as the bus weaves in and out of the traffic. When you’re stuck on the road due to heavy traffic, try not to inhale too deeply so as not to take in the aroma of the person sitting next to you. 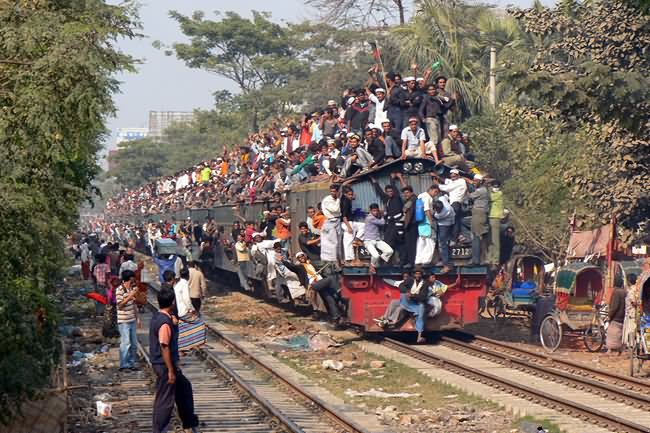 Two years ago back in 2008, the Mumbai Central and Western Railway released data to the public showing that they are accountable for the over 20,000 deaths related to train accidents in the past five years alone. This means that the trains in Mumbai are considered to be the most dangerous form of transportation in the whole world.

Trains in India’s capital city are always filled to the brim with passengers. People are often pushed out of the trains, accidentally get smashed into a telephone pole, and deaths along the tracks are not uncommon news. Lots of times, the train doors would not close because of too many people inside the coach. 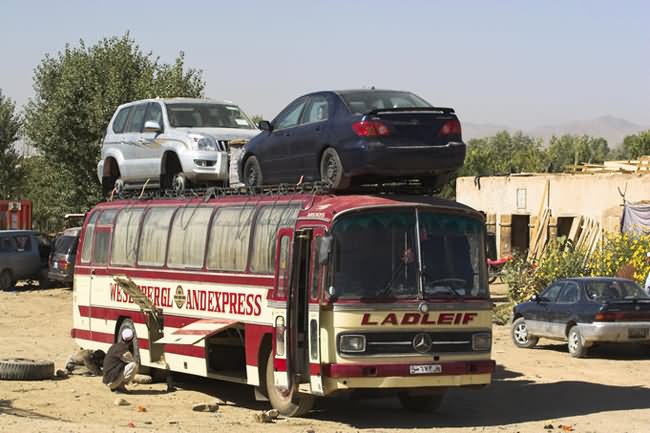 Compared to the other modes of transportation that have made it to our list, the buses in Afghanistan are very clean, smell good, extremely comfortable and offer a smooth and also quiet ride to its passengers. However, these Afghan buses take the top spot because of the ever present danger that is posed on its passengers. No matter how much precaution you take when you get on that bus, you run a high risk of being kidnapped in this politically unstable territory.